Roscoe Pound on the Development of English Law

Roscoe Pound, Dean of Harvard Law from 1916 to 1936, was a prolific writer in 1920s and 1930s regarding jurisprudence.  Here is Dean Pound’s description – both succinct and accurate – regarding the path of the law. 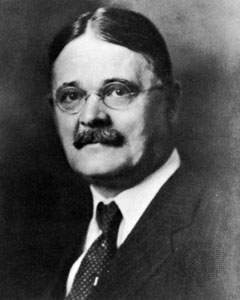 “The historical school thought of each in terms of the growth of an organism, in terms of a development by the force of something working from within, wholly apart from human activity.  Blackstone’s analogy of an English castle made into a modern house, of something made over by men for their needs, by constant adaptations of and addings to the old materials, is quite as well taken.

“Indeed we might well compare these systems of law to one of the old churches in Rome.  Perhaps the Servian wall is in its foundations and an old pre-Christian basilica was the first edifice.  It was made over into a church in the fourth century.

“Perhaps in the ninth century a new church was built on the foundations and with part of the walls.

“It was rebuilt in the twelfth century and many stones and ornaments and some of the old mosaics and paintings were incorporated.

“It was restored frequently in later centuries and overhauled thoroughly in an eighteenth-century restoration in the baroque style of the time.

“The nineteenth century has added new chapels and monuments and has sought sometimes to bring to light some fragments of antiquity.

“How much of what men use today is the Servian wall or the Roman basilica, or the church in which the fifth-century council sat, or the church of the twelfth century or even the church of the Renaissance?  Such a picture is much nearer the truth than the picture of organic evolution and continuous identity with which the historical school made us familiar.”