Roscoe Pound, dean of Harvard Law School, was an influential legal scholar with a large body of writings.  Some say he later contradicted himself; perhaps, but his earlier writings offer deep insight into the American legal system.

(Pound was born in 1870, and was raised in Nebraska.  His chief academic training was as a botanist, and he received a PhD in botany.  Nebraska, and many other midwestern states, were ravaged by locusts in the late 1870s.  Consider how such events transformed the young botanist.) 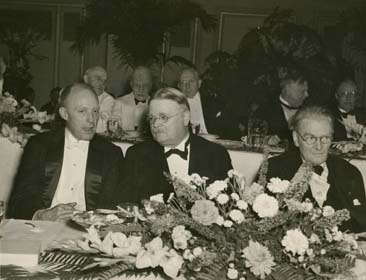 “The truth that more and more since the sixteenth century and universally in the nineteenth century the end of law was conceived in terns of the maximum of individual self-assertion.  This end was to be attained through a politico-legal ordering of society in which coercive social control was reduced to its lowest terms.”

“Self assertion is one of the fundamental instincts or, if you will, one of the fundamental desires of men … The conception of law as a necessary evil, the doctrine that each rule of law must be justified by showing that it promotes a maximum of individual self-assertion, the doctrine of a minimum of law, restricted to what is demonstrably necessary to the realization of freedom as an idea, are protests against which … eighteenth-century thinking had seemed to lead.”

“We cannot develop the utmost that is in human powers in a mad scramble in which values are lost by friction and waste.  We must have a certain ordering of human activities that puts limits to human action, that assigns each to do things in order to protect existing values and to further the creation of new ones.  How far this ordering shall go must depend on the civilization of the time and place, on the values to be conserved and the means at hand to create new ones.”

“There is no universal body of legal institutions and legal rules for all civilizations.  Instead there is a universal idea, namely, human civilization.  ‘Different in its details,’ [Kohler] says, law ‘is alike in the fundamental quest, that is, the furthering of civilization through a forcible ordering of things … a relation which takes on a different content with the infinite variety in the conditions of human cultivation’” …

“In rural, pioneer, agricultural America of the forepart of the last century, there was no occasion to limit the contracts a labourer could make as to taking his pay in goods.  To have done so would have been arbitrary.

“In urban, industrial America of the twentieth century, on the other hand, a regime of abstract freedom of contract between employer and employee often led to a destruction of values.  It led to sacrifice of the social interest in the human life of the individual worker.  Hence it was not unreasonable to put limits upon what employer and employee might contract.”

“There must be some system that does this.  It may be done by political or politico military machinery, as in the extreme case of Sparta; by tradition and stratified society resting on authority, as in the Middle Ages; by free competition, as we sought to do in the nineteenth century, or by an economic regime, as today.”

“In any event it is the place of the law to uphold that system so that civilization may he maintained  … A change of attitude in legal thinking throughout the world, which marks twentieth century jurisprudence, rests on recognition of the social interest in the individual life as something broader and more inclusive than individual self-assertion.”